Posted by Unknown on June 20, 2015
When he learnt that his mother was ill  & bed ridden Adi Sankara reached Kalady.The end time came .He prayed to Hari to bless her with moksha.  He has come there leaving his disciples , his relatives &  Nambudiri bhramins  opposed him as a sanyasi should not perform then the last ritual .As he could not take her to the burning ghat, he took her to the corner place in the backyard of his house. He placed plantain stems  covering her body & lit the  fire by his yoga power as they refused to give him fire. Sankara  proceeded to Kamarup the present Guwahati in Assam. There he defeated the famous shakta commentator Abinava Gupta.He later went to Joshi, built a mutt at Joshi & temple at Badri.He later reached  Kedarnath ,higher up in Himalayas.He became one with the Linga in 820 A.D in his 32nd year.We should always remember him  for his hard work in reviving Hinduism by establishing Advaita philosophy.At his period lot of other  religious faiths were threatening the very existence of Hindu religion.He preached  the glory of veda Shastras   & convniced the people & many ruling kings to follow our mother religion. Bhaja Govindam,Viveka chudamani,Soundarya lahari &  many more are his master pieces.He lived  a very simple life  & followed  what he preached.Photo  below the shrine of Adi Shankara at Kalady(photo courtesy- Sringeri mutt).Bottom second photo - right side Badrinath temple - Badri Narayanan.Left side  Kedarnath temple built by Sri .Adi Shankara -one among 12 jyothir lingas.(photo courtesy - temple committee of Badrinath & Kedarnath).You can see the Big bull - Sri.Nandhigeshwar in fron t of Kedharnath temple.It is  said  that Pandavas visited this place & worshiped Shiva here after the end of  the great war. 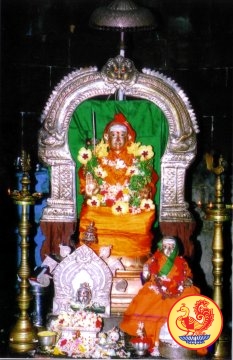