The history of Avudaiyar temple - part 3. 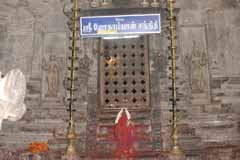 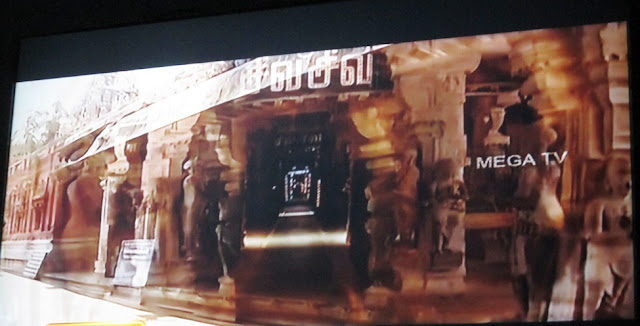 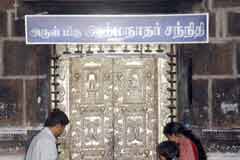 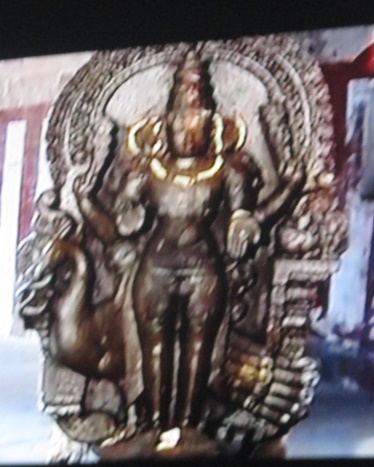 pandya  king caning Vandhi's servant(God Shiva) for negligence of work.After seeing Manickavasagar's earnestness & maturity in mind, God  Shiva blesses him by performing Thiruvadi Dheetcha & Sparisha Dheetcha(See the photos) under  The tree of Kurundha(குருந்த மரம்).This  is an excellent  gift from God .Now  think over  the Devotees of God Shiva at Mount Kailash who assembled there to listen to "Sivagama Sastra" directly from   Shiva Himself.In his earlier birth Manivasakar was one among them.After  blessing from Guru disappears .As Manickavasakar was very much saddened by the Guru's departure,Shiva instructs through  a voice  from the sky(அசரீரி) that Manickavasakar should perform his Chief ministerial function under Arimardhana Pandian for some time & He would bless him with Moksha in the end.Now Manickavasakar wore his ministerial dress   & began to perform his regular duties.Meanwhile spies of Pandya king informed him that the C.M has spent all the gold coins he was given in building the Shiva temple without obtaining King's concern  & there  won't be any new horses for his army.After this he  instructed his officials to  arrest the C.M for negligence of his duty.The C. M was put in  a jail in Madurai Palace.The C. M was never the less bothered about this as he knew that every ting happening is "God Shiva's  Play"(சிவனாரின்  திருவிளையாடல்).After sometime on a full moon day,the king's officials noticed a huge sand storm approaching Madurai palace.They were worried that some enemy country was invading Pandya Kingdom.Soon spies brought the news of new horses coming there lead by  a commander with big moustache . Soon the commander reached the palace & he was received by the king .The commander was very attractive, looked like  a  great warrior.He told the king  & his ministers to take care  of the new  horses as they were rare brand.The commander told the king, gold coins were paid to him by his C.M & left .The king now felt sorry for Manickavasakar & he was immediately released from the jail.Night came .In the mid night there was lot of howling from foxes in side the horse stable waking up every  one in the palace including the king.The king's soldiers noticed that  all the new horses have turned into foxes now & the king himself noticed it.The next day the C.M was arrested .Now the king instructed his men to roll the C.M tying his hands & feet with iron chain in the hot sand of  River Vaigai(summer time- no water in the river). Soldiers took  the C.M  to the river bed.Now there was  a sudden flood in the river.The flood was  so  furious that it breached in many places on its course .The Whole Madurai city  & its  suburbs were flooded.As the situation went  out of control, the  king instructed that every householder should send a person to close  the breaches in Vaigai.                                                                                                                                  There was one old lady called  "Vandhi" who sold rice puddings daily to make her living residing  at Madurai.She did n't have any children or men folk  to take care of her.She was very much  worried that how to send  a servant on behalf of her & how could she pay her as she was very poor.She prayed to God Chokkanathar(Madurai).Now a person  like a worker came  near Vandhi's hou who was busy in preparing rice puddings & selling  at her door step.Vandhi noticed the new man & called him near her.She asked him whether he could go for stopping the breaches in the river as  it is mandatory for every Madurai city dweller.She also said that she would pay him by offering "broken rice puddings" as the unbroken  would be sold to the customers.The new comer readily agreed to this.Now the new comer said he was hungry.When vandhi opened the cover of the cooker,she found all the rice pudding in broken condition. She gave away all the broken puddings to the new comer.He ate it fully & went to the work taking a basket & spade.He reached the river bank &  felt sleepy.He began to sleep under a tree.The next day also,  vandhi found all the rice puddings broken.She gave it to  the servant.He ate it & on that day also he did  not do any work.At that time  the king came there to  see the nature of   relief work.When he saw  a worker sleeping there,he got angry & asked his men whom he was.Then The king was told that he was sent by the old woman Vandhi.The king grabbed a cane from his men & beat the sleeping man.The sleeping man laughed  at the king & where as the king felt the pain  in his back.It is learnt that all living beings felt that pain.Now the breaches got closed.Now the king began to analyse the happenings.He understood that Manicavaasakar was  a true devotee of Shiva & the commander who brought the new horses,the  servant of Vandhi  all were Shiva only He immediately met Manicavasakar & sought his pardon.Manicavaasakar immediately asked the king to relieve him  from ministerial duties as   he was deeply attached to God Shiva & could not perform worldly matters.The king relieved  manicavaasakar.Vandhi left this  world ,the moment her servant was beaten by the king.Her Karma  came to an end  & she was liberated by God Chockanathar.See how Shiva is responding to the devotees.Shiva has performed similarly 64 acts for his devotees at Madurai which has been written as"Thiruvilayadal Puranam"by Paranjothi Munivar in Tamil.Will be concluded in the next post.