Posted by Learn kolam on August 01, 2015
"Aadiperukku" (ஆடிப்பெருக்கு - பதினெட்டாம் பெருக்கு ) is celebrated in the month of July - August,in the 18th day of Tamil month ஆடி.This year it falls on 3rd July.Normally Tamil month Aadi is considered very sacred in the South.Goddess Mariamman is worshipped in all places.During the Fridays of this month,special poojas are conducted in the temples glorifying Goddess sakthi.Temple festivals are conducted in both Shiva & Vaishnava temples.During 18 th day, idols ( உற்சவ மூர்த்தி )are decorated in a grand manner with flower garlands & taken in a procession to a near by river.sprinkling of holy water from the river is carried out with devotion.(தீர்த்தவாரி).During 1960 in my early child hood days, i have participated in these festival.We used to decorate a small wooden vehicle with 4 wheels covered like a temple tower (சப்பரம்),place a small idol in it , tying with a rope,drew it to the river bank.In the school also teachers & students make a vehicle in a bigger size, decorate it & the students used to draw it happily to river side where prayers are offered to River Cauvery ,requesting Her to be punctual in her arrival for the start of agriculture.Tiruchi,Thanjavur,Nagapattinam,Mayiladuthurai,Kumbakonam,Thiruvaiyaaru,Thiruvarur,Vedharanyam &Karaikkal(Pondicherry state),Seerkazhi & Tharangampadi are mostly irrigated & benefited by the flowing of Cauvery & its branches.Chola kings are the fore runners of the irrigation system in this region.King Karikalan built a dam out of clay( you won't believe)at a place called Kallanai near by Thiruvaiyaru which is in tact even today.They dug various rivers like vennaru,vettaru,kudamuruttiyaru branching river Cauvery to nook & corner of the above places which is called "Cauvery Delta".Chola kings also dug lakes,big tanks & wells.They attached well built tanks fed by river cauvery to hundreds of temple they built to the north & South of its flow.All these temples are glorified in Devaram & Divyaprabandham holy hymns by Nayanmars & Azhvars.The kings also donated thousands of cultivable lands to these temples for the benefit of citizens.They honoured vedic scholars,priests for performing poojas in the temples regularly & conducting Yagnas.They also donated villages to these Vedic scholars.You can still find many villages in these area which are called"Chadurvedhi Mangalam". Our great writer Kalki Krishnamoorthy has described about "Cauvery" detaily in his book "Ponniyin Selvan" beautifully. Chola kings & their contribution to the "Delta farmers". People were then either Shiva or vaishnava devotee & followed a disciplined life.There were "mandrams" for divine saints like "Sambandar & Thirunavukkarasar" who spread Bhakti culture among Tamil people.Think of the mandrams for the present day cine artistes.After 1967 mind set in the public changed .All the temple lands were taken away & every inch of temple land is occupied illegally.Good thinkers were sidelined.Where Sri Rudram was recited regularly,now political slogans are broad casted. out of agony who has seen all these things, i am writing this. Women & girls both married & unmarried would worship River Cauvery as Goddess & seek her blessing for a prosperous life,timely monsoon.They will tie sacred thread( மஞ்சள் சரடு).Usually elderly women (சுமங்கலி)will tie the sacred thread to the youngsters blessing them good married life & to the girls awaiting marriage to get a good husband.Variety rice is offered to God.Newly married couple usually go to the river banks & after worshipping there ,have a pleasant time.Where there is no river,we used to invoke the blessing of Cauvery in two small brass containers with water.A small compound like thing is formed by wet sand on all the four sides with an entrance.This is done in an open terrace with direct Sun light & Sun God is also worshipped to fetch us Good rain in addition to God Varuna.Fruits,raw rice mixed with jaggery & co co nut is offered to Cauvery.Girls wear new dresses & have a happy occasion.One can not forget former British Engineer Stanley who was instrumental in building a dam across Cauvery at Mettur ( 40 kms away from Salem),which is called "Stanley Reservoir".Cauvery water is stored in this reservoir up to 120 feet height.It also supplies drinking water to Salem,Authur covering more than 80 kms.Cauvery water from Mettur irrigates & supplies drinking water to all the cities i have mentioned. We used to bathe in cauvery water or tanks in these regions & every one brought up here are very good swimmers. 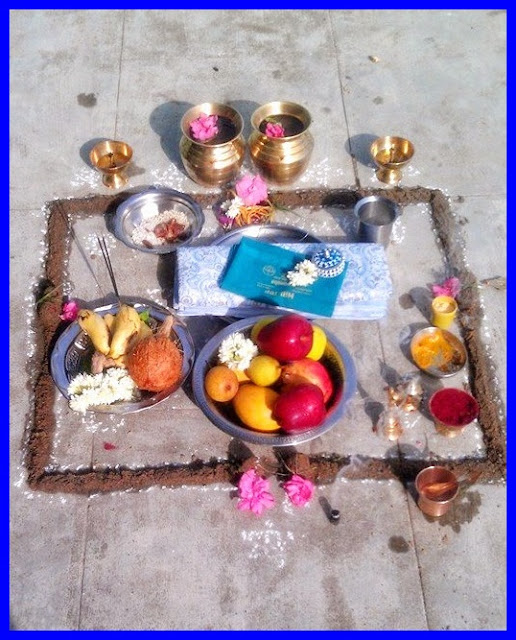