Posted by Learn kolam on September 19, 2015
Sages  lead most disciplined life.Most of them were married.They selected a natural location mostly by a river side surrounded by mountains to set their asrams( small huts made up of bamboos ).In addition to their routine life , they also taught Vedha Sastras to the students.Ruling kings & parents used to offer the essentials to run the asram.Their wives took care of the children  studying in the asram as if their own children.They have practised  what they preached.Speaking satyam (truth) is their strength & they feared none.Some rishis used to send their children to other rishi's asram .They thought that if they study with their parents,they may expect some lenience.Such were their honesty.Kanva maharishi was the foster father of Shakundalai  who married the king Dushyanta.The son of this couple  ,Bharathan was  a great warrior & honest king,He was the first ruler of our country.Our country was named after him -"Bharath".Kanva Maharishi tells the king Dusyanthan about the importance of  husband & wife relationship , how to lead a good life.

Husband  & wife are like  Paramatma & Jeevatma.Without one it is not possible to lead a life at all.Out of many relationships we have in this world, nothing is equal to divine relationship in between them.This is not bound by time .It lasts long & continues in our later births also.We perform thithi & Dharpanam in new moon days in honour of our forefathers.We also invite their wives & honour them.This shows how much pure, divine & permanent is the  nature of this relationship. 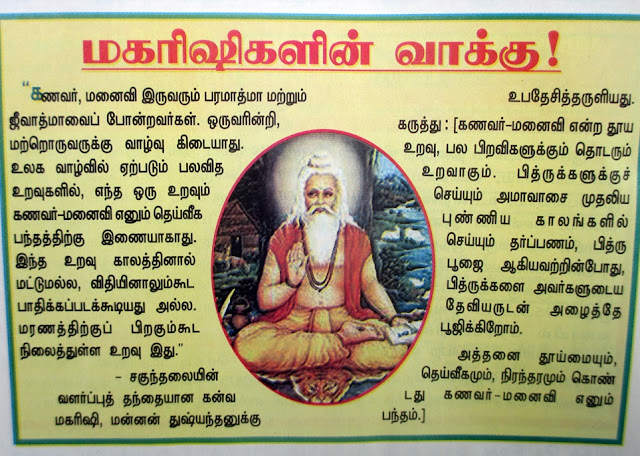